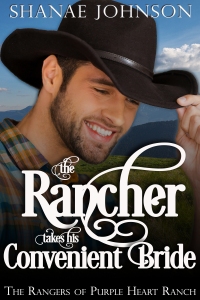 Instalove alters the plan when an Army Ranger makes a calculated deal to wed a female rancher in a modern day marriage of convenience.

Army Ranger Tony Keaton is under a tight deadline. He’s got just 90 days to break ground, construct, and open the elite forces training camp he and his men have been planning since they left the military. The problem is his camp, which is on the grounds of the Purple Heart Ranch, needs access to the adjoining creek for their training exercises. Luckily, the stunning female rancher who owns that piece of land is willing to make a deal.

Cattle rancher Brenda Vance is shedding ranch hands who can’t stand working for a woman. But she’s also bleeding money as she modernizes her property. To cover the debt of the technological advances, she agrees to sell the creek to Keaton. But the only way to cut through the red tape and transfer the land quickly enough to meet his 90 day deadline is to get married. Their iron-clad prenup protects her assets, but what will protect her heart?

As Keaton and his unit of Army Rangers work the land with no problem taking orders from a woman, Brenda has dangerous dreams of this marriage lasting longer than the red tape requires. Dating isn’t on Keaton’s to do list, but a woman like Brenda makes him want to move love to the top of his priorities.

Will these two stick to the deal and go their separate ways once the camp is up and running? Or will they change their plans and make this marriage of convenience last? 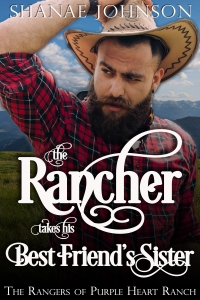 Falling for his best friend’s sister is not an option when an Army Ranger is tricked into a modern day marriage of convenience.

Army Ranger Griffin “Grizz” Hayes watched his mother work her fingers to the bone to provide for her family after his dad left them. Determined never to be a burden and to make his own way, Grizz decides he’ll never marry. It’s easy enough when the only girl who has ever held his attention is off limits.

Patricia Keaton fell in love with Grizz the first time he picked her up out of her crib and played Patty Cakes with her. Her feelings only grew over the years that her brother’s best friend spent more and more time with the Keaton family. Now that she’s come of age, and Grizz has separated from the army, she’s sure it’s time to get her man.

But when a dark figure puts Patty in danger, Grizz does what he never thought he’d do; he agrees to marry Patty and be her shield against the menace. Only now, with a ring on her finger, Grizz has no good reason to keep his distance, and Patty has every reason to play her role as wife to the fullest of the job description.

Will Grizz take on the spousal privilege offered him by the woman of his dreams? Or will he continue to keep his best friend’s sister at arms length through their whole marriage of convenience.

Chasing his runaway bride to the altar is all this Army Ranger cares about in this modern day marriage of convenience.